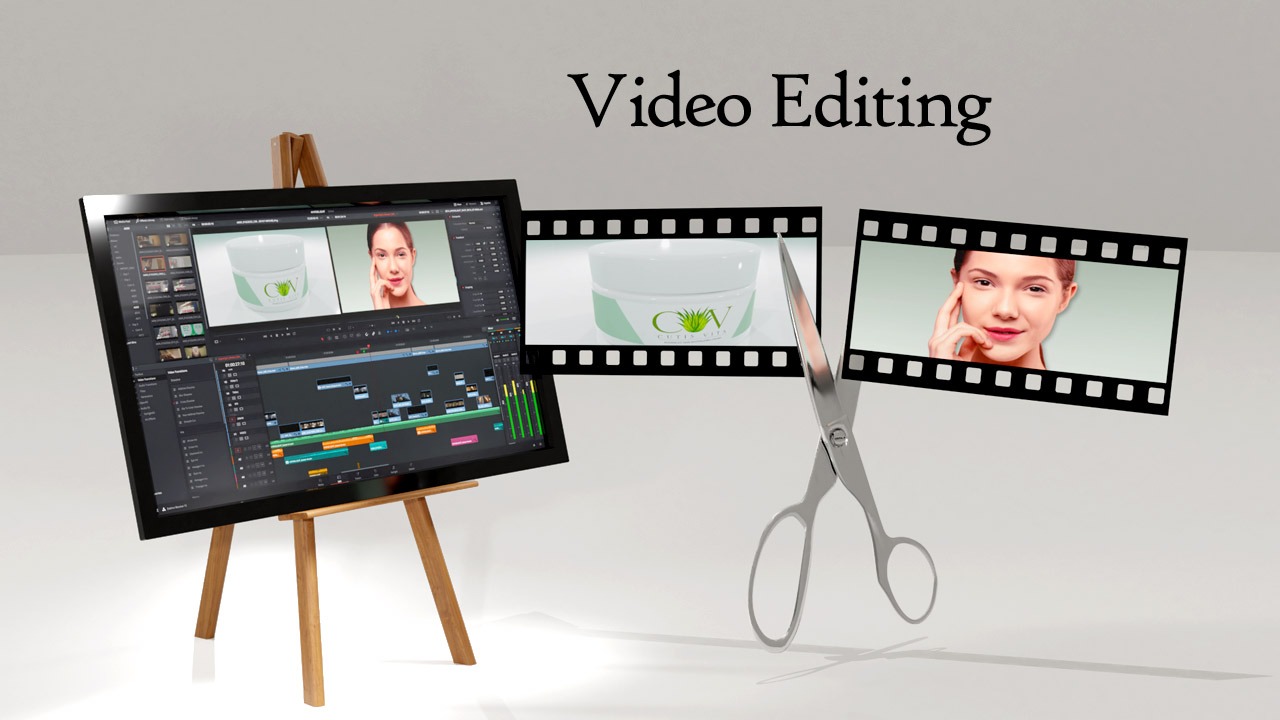 Editing as an Art Form:

Editing is an art form just much as any art. It’s the “invisible art.” It can and does make or break a video. Ever seen a movie with crappy, jolting jump shots, or monotonous slow shots held on the actor/scene for WAY too long? That's what we're talking about here.

An editor takes raw footage, selects shots, and combines them into logical sequences according to a well-written Script to create a finished video.

However, with video editing we don’t merely dispassionately put Clips together in the hopes of a not-so-ragged final video, or worse, regurgitate low-res YouTube car-crash videos and slap some non-sequitur music over the top with some silly online editor made for Elementary/Middle school kids.
Ugly and unprofessional.

In the contrary, we creatively work with the spirit of the original well-written Script, layers of footage and images, the mood of the story, the keywords of the narration, the interaction of the speaker’s dialogue, the arrangement and cadence of the music, the pacing, the placement and flow of the graphic elements, the nuances of special effects and ALL the key principles of marketing to effectively craft all components into a cohesive whole video that has continuity, conveys the message and inspires buyer confidence.

The final video has mood, pace, inspiration, marketing message, impact, and is memorable. THAT’S a video.

In a nutshell, here is where we correct the EXPOSURE, the WHITE BALANCE, and SATURATION of the individual shots and the entire scene, so they POP!. But of course there's so much more to it. Color grading is the process of artistically and logically enhancing the appearance of a shot. A given shot may require correction to contrast, color, saturation, detail sharpening, black level, and white point, and more. Perhaps we need to color match other shots in a scene, or compensate for variations in the lighting conditions, or compensate for the intended viewing environment (dark, dim, bright surrounds).

Beyond basic color correction, there's STYLE. Or "stylizing." Often LUTs (Look Up Tables) are used to add STYLE to a shot and scene to give it a certain "look," feel or artistic appearance. This enhances and/or alters the mood of a shot and scene—the visual equivalent to the musical score of a film. Ever see sci-fi scenes with lots of blue light covering everything?

Ever watch these news casters come on with their live feed of the latest "shocking" bad news---with no other music or sounds? Feels incomplete. Dry. Lifeless. 2 dimensional. No mood. Just insensate calamity.

Now compare that to the epic music that plays behind the victorious hero who fights the grand battle and then lays waste to the evil villain and rescues the damsel in distress, and the audience cheers and girls cry tears of joy. Or perhaps a decent horror film where there’s nice scary dissonant music while camera simply rolls down the hallway anticipating what’s about to pop out around the next corner and scare the pants off the already petrified audience.

That’s all the difference in the world. And the music track does that.

Music for film and video (any audio/visual presentation) is an art as much as any other. Although we don’t offer film industry level music scoring---music composition and arranging custom for film, TV, etc.,---we do however come with that background experience, and artistically we know what goes into it.

We can take a given music piece (generally instrumental without vocals), made up of various sections and hooks---intro, verse, chorus, bridge, breakdown, etc., and edit it such that it’s seamless and plays along the video as if it was written custom for and played for that video it’s featured in.

Length is not a barrier either; Even a short musical loop of a minute or so can be edited and strategically lengthened, then laid over a video of over 5 full minutes, and never feel repetitive. Or vice versa, where a melodic piece of music of over 5 minutes can be strategically edited down, and laid over a video of under a minute, and never feel truncated.

Indeed, the Music Track deserves an entire section of description all for itself. But just know that to slap some non-sequitur music over the top of your video means video death-by-music.

Yet another essential component to overall Video Editing is SoundFX, or "Sound Design."  It's the art of adding sounds to enhance the message of the shot and/or the mood of a scene. Sounds can be used for a variety of effects. We use a lot of "wild track" such as city noise, traffic noise, crowd noise, applause, crickets and night sounds, etc., etc. SoundFX could be simple foley sounds such as foot steps on wood floor, or water dripping, or doors opening/closing, etc., OR just about any sound you can imagine to enhance the shot/scene. We did a great video recently utilizing many sci-fi sounds to add LIFE to the otherwise lifeless music track. Came out great.